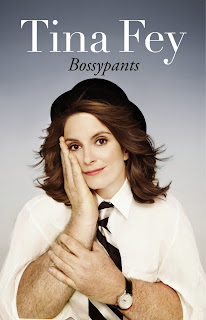 I wasn't sure what to expect from comedienne Tina Fey's memoir, Bossypants. She is so young, yet iconic and very successful. I wasn't completely disappointed with the memoir, but I also wasn't completely satisfied.

I thought she wrote some funny stuff in her book and I laughed out loud quite often. I like funny. But I've read consistently funnier memoirs by people who aren't "professionally" funny. (Caitlin Moran, anyone? Jenny Lawson?) I know, the curse of the comedienne is that she's always expected to be hilarious, which isn't fair — but only when you bump into her at the grocery store.

May I also ads: I have read more honest and revealing memoirs. At times she skated across the top, rather safely. That was disappointing.

I was a little surprised by what she chose to include in her memoir: some of it was a little out of left field (climbing a mountain at night) and some of it was unexpectedly personal and rather un-funny (wanting a second child). What she revealed about Saturday Night Live, one of her best-known gigs, was guarded. She definitely had a handle on what she wanted to reveal.

Having said that, there were some nice surprises. I liked meeting her father. (What a stylin' badass!) I liked the readers' guide at the end, which gently poked fun at readers' guides and social media. I liked the description of her "30 Rock" staff because she gives props to the people who help her be in the position to write a memoir people want to read. I liked the part about her Palin impersonation; it was kind to the people usually criticized or vilified by those on the "other side of the aisle." I kind of liked the whole Christmas trip chapter.

I liked her "girl power" moment, when she told us how Amy Pohler shut up Jimmy Fallon about what was funny. Personally, I have fond humor long controlled by men who write about what they think is funny and make women the butt of many jokes, or assign them certain roles to support their jokes. I also think women writing for current cinema too often have turned themselves into men to try to be funny to everyone. ("Bridesmaids," anyone?)  Tina didn't do that with her first feature film, "Mean Girls." She looked at how women act and found the humor in it, and it told a great story. I would have liked a little more insight into how she creates and judges "funny."

In the end, I didn't think there wasn't enough Tina in the memoir. I don't think I know her any better now than I did before reading the book. I didn't expect deep, dark secrets — which, don't get me wrong, I'm not sad she doesn't seem to have — but I expected more "her."

I liked her writing, though, and I will continue to watch and read her work.

Have you read Bossypants? What did you think? Tell us in the comments below, or drop me a line.
Amy Pohler Bossypants Jimmy Fallon memoir memoirs Sarah Palin Saturday Night Live Tina Fey