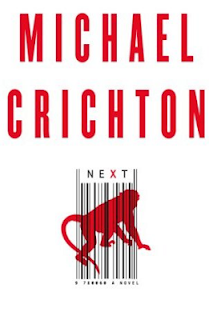 Michael Crichton was always about a decade before the rest of the world. Sucking dinosaur DNA out of bits of amber? Check. Computers taking over the world? Check. Time travel causing schisms in our universe and its travelers? Check.

His last book seemed to look inward as much as ahead: to our cells and what's in them. Who owns a cell? Who owns a gene? Who owns the blood the doctors take from you to do tests? Rebecca Skloot was asking the same questions while writing The Immortal Life of Henrietta Lacks during this time — and unfortunately, the ending has yet to be written for her non-fiction bestseller.

Crichton takes multiple storylines and weaves them into a tapestry of confusion, deception, arrogance and chance. Frank Burnet's cells were taken by a doctor and used for research to develop a treatment worth millions of dollars, only Frank didn't know until much later, when he sued for a portion of the proceeds.

Henry Kendall works at a lab in Maryland for a while and uses part of his own cell DNA in an experiment that, under normal circumstances would have been monitored differently. Alas, he discovers much later in life that it didn't conclude as he thought it would, and he's faced with the surprising results.

Tourists in Sumatra hear an orangutan swearing in French and Dutch. When the media and research community get a hold of the news, they perceive a development in the primate's vocal cords that signals a possible evolutionary change. How can they find out the truth?

Gerard is an African grey parrot who was injected with human cells as a chick. As a result, he has a level of intelligence and self-awareness that is picked up only when his owner's son has perfect homework but can't perform the same results in the classroom. Could his secret be Gerard?

Venture capitalist Jack Watson wants to make his company, BioGen, immensely successful with Burnet's cells. His messy divorce makes for an interesting plot complication that tangles with his shady security director with genetic predisposition to impulsive behavior and his research assistant's drug-addicted brother who huffed something that never should have been in the car to begin with.

In the end, there are more questions than answers (which is what one expects from a Crichton novel). However, there are some amazing characters who are not that far from reality, others readers wish were — and enough surprise to keep even the most savvy reader guessing to the end.

This book is a great summer read that will frighten, interest and, at times, delight readers. Thriller-lovers and tech-lovers will find enough to keep them satisfied, while the rest of the reading public can understand the story enough to enjoy it. I highly recommend it.
cells Crichton DNA genes labs Michael Crichton Next research