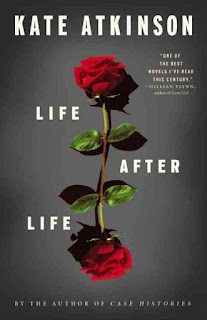 If you're off by one degree and don't correct your course, the gap between where you are and where you want to be grows wider with every step. Kate Atkinson measures each step of Ursula's existence in Life After Life, and we see what happens if she alters it by as little as a single step.

At first, the return to her birth appeared relentless, and I feared it would be the same story with a different ending each time. Thankfully, that was not the case. The plot complications begin to vary in very interesting ways.

Ursula is born on a snowy winter day in 1910. The weather prevents the midwife from arriving, and the doctor arrives too late: the cord was around the baby's neck and she did not live. Had the doctor been there with a pair or surgical scissors....

The scene changes. Snow is still falling but the doctor manages to hitch a ride through the snowy fields from a local farmer and, when delivering the baby, quickly removes the cord. The child lives. However, a trip to the ocean a few years later provides a new ending to Ursula's story.

The scene begins again, only there's a new character and a new outcome. Sometimes the details of the story remain the same until the plot complication. Other times, there's more than a single twist in the story.

What becomes most interesting is Ursula: she is the same, but not exactly the same. Each iteration of her life becomes an opportunity to review and reveal different aspects of Ursula's life, and the lives of those around her. Even "minor" characters evolve in slightly different ways. For some, their path was the same and only Ursula was different.

Each life Ursula lived was plausible. Each path she took made sense, each choice was understandable. There were a few surprises Atkinson slipped in that made me cheer out loud — and every tragedy, every loss, every misstep was carefully rendered within the story's structure.

I highly recommend this book. I hope you enjoy it as much as I did. (And if you already read it, let me know what you thought.)
karma Kate Atkinson Life After Life reincarnation The Great War World War I World War II