Review: The Breath of God 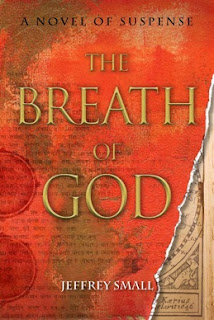 Jeffrey Small's debut novel, The Breath of God, was heralded as a "novel of suspense" and likened to the work of popular novelist Dan Brown.  I was very excited and couldn't wait to crack the spine.  Once I got in, however, I found a far different book than I anticipated — and not as enjoyable.

Grant Matthews encounters a 2,000-year-old text that reveals what Jesus Christ did during his two decades of action accounted for in the Holy Bible.  Before he can unpack his bags, a Southern preacher with ambition decides to debunk Matthews' prematurely and unintentionally published revelations.  However, technology fails him and he must travel east again to find the original documents, following Kinley and the surreptitious clues he leaves with a few different people around the world.  Only he's not alone, and this self-proclaimed "servant of God" will stop at nothing to protect his religion — and his church.

Of course, Small threw in a brilliant teacher; a romance with an unbelievably smart, resourceful and supportive woman; and lots of long lectures on three major world religions to give readers a boring, tedious Dan Brown novel.

If Small's purpose was to provide us with a book on comparative religion, we would have been better served with a series of essays, rather than essays disguised as a novel.

The book starts out slow, methodical — in a word, tedious.  The "secret" is revealed in such a subtle way I had to re-read a revealing chapter just to find it, and the explanation as to why the secret is so white-hot is woven into multiple chapters, diluting the excitement of the discovery. All dialog is too pitch-perfect, too tautly woven to be conversation: there is no casual conversation if everything is wrought with Meaning. And that's just the construction of the novel.

Let's move onto characters, my personal litmus test.  Everyone is constructed of flimsy beige cardboard with no complexity or depth.  The bad guys are wicked beyond imagination, shallow and easily distracted by something shiny — and way, way too successful.  The good guys are practically wearing white and riding up on Shadowfax with a banner declaring their purity, blindly bungling along without a clue to their imminent danger.  Random facts are included in dialog and character development to offer: Grant's folly of youth is blown out of proportion, Kristin's youthful trauma was too tautly played, Kinley's omnipotence is heralded by too many people. Police experts are too stupid to find a single computer program their investigators should have found as easily as Grant accidenntally did (at a Pivotal Moment in the Story).  And the unbelievable relative ease Grant finds at the end of the story was insulting to every character that had gone before.

Finally, the action: it was too slow in the beginning, too cumbersome in the middle, too disjointed near the end — and the multiple surprise endings weren't just surprises, but totally unexpected in a bad way.  "I didn't see that coming" is good if the author didn't seem to hide it just so he could spring it on the reader at the Opportune Moment.  I wanted to pitch the book across the room.

I do not recommend this book.

However, if you read it and enjoyed it, then let me know what you liked about it.
Buddhism Christianity Hundu India Issa Jeffrey Small Taj Mahal The Breath of God