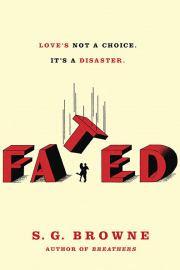 Still, it was a good read, with interesting characters, amusing personifications of human vice and virtue and a few surprises in a story that never goes quite where it seems to be veering.

Fabio has a good life: a loft on the Upper East Side, a job that is not too taxing, an opportunity to travel, friendships with his ilk all over the globe... and he's an immortal.  Fate, as one would have it.

The thing is, Fabio is a little distanced from humanity.  Humans make their own decisions that put them on the Path of Destiny (a stunningly beautiful immortal woman with a flair for red) or in Fate's crosshairs.

Fabio sees it all in a glance: with a single thought or gesture, humans can change from popular and beloved science teacher to adulterer.  Or child molester, drug addict, thief or politician — certainly not the Nobel Peace Prize winners and Super Bowl champions in Destiny's lineup.  However, no matter how much it annoys him, he cannot interfere.  It's against the rules.

Then along comes Sara, a new neighbor in his co-op.  He can't see her Fate, so he knows she is on Destiny's path.  Everyone is touched by her and drawn to her — including Fabio, who arranges his own introduction and can't stay away.  He has had relationships with other human women, and as long as he keeps his identity hidden, there's no harm, no foul.

But Sara is different, and she has an affect on him.  Suddenly, he looks at his charges and wants them to make better decisions.  The best way to do that is to start breaking rules.  Jerry, a.k.a. Jehovah, probably won't notice, the busy man he is.  But when the unexpected arises in response to these changes of Fate, it becomes a problem.  And Fate gets more — and less — than he bargained for.

The story is told with a lackadaisical quality, easily matching the mood of the narrator.  His verbal tics and habits were charming.  I liked Fabio, and I liked his life, but I was weary of him and his dissatisfaction after a while.  Thankfully, the author threw in a few twists and turns to keep the story moving.

Check out this book and let me know what you think.
fate Fated immortals S.B. Browne